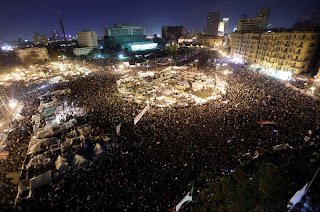 Egypt did it. Mubarak stepping down marks a truly historic moment. The Egyptian Revolution began 18 days ago to protest against poverty, unemployment, government corruption and to end Hosni Mubarak's 30-year rule.

I am inspired most by the the young people who started the anti-government revolt. They utilized social media networks for their fight to have open democracy. Their successful triumph is a powerful example of this interconnected world. Wael Ghonim, revolutionary activist who energized pro-democracy demonstrations in Egypt thanked Zuckerberg and facebook for enabling today's liberation. As H. Newton once wrote,

'The revolution has always been in the hands of the young. The young always inherit the revolution.'

As I'm writing this, I'm hearing the cries of jubilance of thousands of Egyptians chanting "Egypt is Free," and I only feel honored to be able to watch this historical moment. Egypt has proven that the power of peaceful protests, the force of will by people, can bring change. I pray for the people who risked their lives for the freedom they deserved and that power doesn't fall in the wrong hands.

You need to be a member of International Youth Council to add comments!

This reply was deleted.